It was very exciting to have a Laurel Oak runner in a $1 million race for the second consecutive Saturday at Royal Randwick.

The massive prizemoney injection into Sydney Spring racing is great for owners but only if you have a horse good enough to participate. Fortunately this year we do have horses suited to these races and after HANDLE THE TRUTH’s sensational $1.3 million The Kosciuszko victory the previous Saturday, the up-and-coming PANCHO contested the inaugural running of the $1 million Bondi Stakes last Saturday, and ran a great second (pictured below, courtesy of Bradley Photographers). 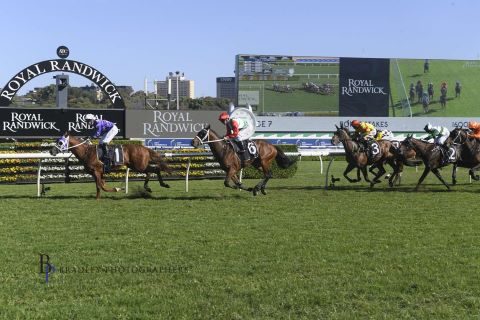 This new race for 3yos over 1600m suited our talented Dissident gelding, trained by Chris Waller, as he has already shown his liking for the distance. When the field did not come up as strong as it could have for the prizemoney on offer, the decision was made to give Pancho his chance even though he was a $21 outsider in the nine-horse field, as there were other proven stakes class horses in the race.

After getting back from his wide gate (eight out of nine), jockey Glyn Schofield had him travelling well behind a good tempo and got him to the outside straightening up in second-last position. He stoked up and started to run on well, and at the 200m mark looked a winning chance. However stablemate Kubrick, who is already proven at Group One level, was held up on the fence and when the narrow opening came for him, he dashed through and Pancho could not catch him, finishing one length behind Kubrick, but a healthy 2.3 lengths in front of the third placegetter.

We were rapt with his effort which left trainer and owners excited for his future. The $190,000 second prize was outstanding and took his earnings to $278,150 at his eighth career start. Chris intends to give him one more run this preparation, in a 3yo Listed race over 1800m at Flemington on Oaks Day, and then he will spell and be aimed for the Randwick and Rosehill Guineas next autumn. That plan has us excited too!