The Keith Dryden-trained HANDLE THE TRUTH started favourite in the 1100m Listed Starlight Stakes at Rosehill last Saturday 30 November. Consequently it was a touch disappointing that he did not win, but he put in another outstanding performance to finish third (pictured below courtesy of Bradley Photographers). 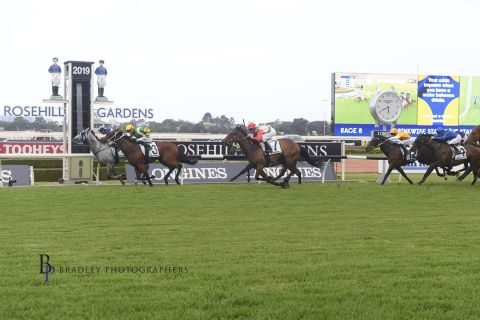 The drop back to 1100m from the 1400m of his last start in the Goulburn Cup was always going to be a risk, but Keith had four weeks to freshen him for the race and he was in great order on race day.

After threatening to be in a perfect position after the start, Handle The Truth was checked twice which forced him to lose ground and travel three-wide. Tommy Berry was suspended for the interference that he caused.

This, combined with the fact that they raced at a fairly modest tempo to the home corner for a Listed 1100m event, meant that he gave away an impossible start on straightening. Handle The Truth flew to the line under Nash Rawiller’s encouragement to fill the minor placing. He ran the fastest last 400m of the meeting as well as the equal-fastest last 200m to highlight the quality of his performance.

After an incredibly successful preparation that included victory in the $1.3 million The Kosciuszko on Everest Day he has now gone for a well-earned spell. All going well his target next year will be the Gr 1 Stradbroke Handicap so we will plot a course towards that when he comes back from a spell. Like the Coolmore Classic above for Sweet Scandal, it is a handicap race so we hope he gets his chance coming in with a light weight.