Kentucky Diva – One To Watch 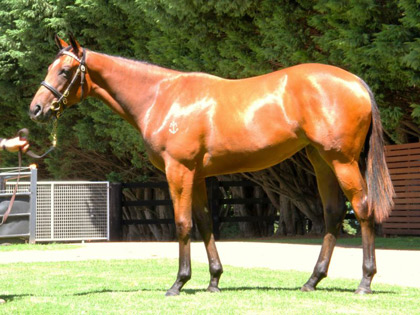 The veteran of just four starts, the Team Hawkes-trained mare (pictured as a yearling) was given a picture-perfect ride by Dwayne Dunn to defeat Romelo (Ekraar) by one and a quarter-lengths with Ayers Rock (Nicconi) three lengths back in third.

The winner of a 1600 metre maiden at Hawkesbury on June 21, Kentucky Diva was coming off a luckless sixth at Warwick Farm at her most recent start.

“She’s only had a handful of starts, the owners have been very patient,” co-trained Wayne Hawkes said.

“They bought a horse knowing that she would need a stack of time.

“She never showed a lot from the get-go but she’s slowly starting to put it together.

“She should have won in Sydney last start, but she is doing the right thing and really hit the line hard today.”

Purchased by Laurel Oak Bloodstock for $280,000 out of the Milburn Creek draft at the 2015 Inglis Premier Yearling Sale, the Makybe bred mare is the fifth foal and fifth winner out of the stakes-winning Jade Robbery mare Valkyrie Diva.

Valkyrie Diva has a 2yo colt by Zoustar. She was not served in 2016 and visited Snitzel last spring.