Last Saturday, 19 October, saw one of the absolute highlight moments in Laurel Oak history when a plan came together as well as anyone could possibly have expected, with HANDLE THE TRUTH’s brilliant victory, pictured below courtesy of Bradley Photographers, in the $1.3 million The Kosciuszko at Royal Randwick. 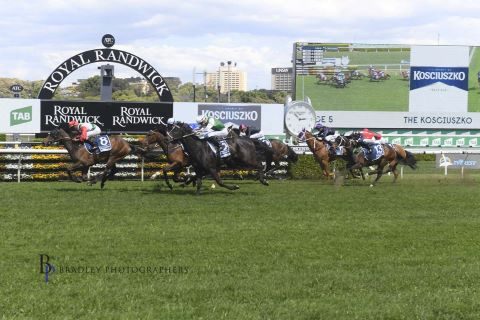 We had identified The Kosciuszko as a potential race for Handle The Truth earlier in the year. After his impressive Rosehill win in July, trainer Keith Dryden mapped out a plan for him. He had a little freshen-up and then back to work aiming for the race with the only variables in the plan being whether he had one trial and two race starts or two trials and one race start. Race programming meant that Keith chose the latter option which saw him run an unlucky fifth at Randwick on Epsom Day.

Nash Rawiller was booked to ride several weeks ago and the horse was in great order leading into the race. The last piece of the jigsaw was a good barrier in seven out of fourteen, and we arrived on the day knowing that we were a live hope for victory.

Walking onto the track we heard the course announcer say that Handle The Truth would look the winner at some stage in the straight due to his on-pace racing style, and the fact that the main dangers were get-back-and-run-on horses. And that is how it panned out.

After jumping reasonably, he mustered quickly and Nash had him trailing the speed and poised to challenge on straightening. He went to the lead 200m from home and held on for a one-length victory.

To say that there was unbridled joy in our camp would not do the display of emotions justice. We were hoarse from cheering and the mass celebrations began.

The Kosciuszko provided a unique concept in that we were chosen by a slot-holder who had the good fortune to draw a winning ticket from the sweepstake in which several thousand tickets were sold. Our slot-holders were the Shellharbour TAB Punters Club, of which there were forty members, and around thirty of them came to the races. Add that to our twenty-odd owners in Handle The Truth and there was much jubilation.

We have got to know some of the slot-holders over the past few weeks and it has been a delight to be involved with them. And it is also a delight to see the pure joy that Handle The Truth has brought them. They could not have imagined the journey that a $5 ticket in a sweep could have taken them on. Pictured below, courtesy of Bradley Photographers, are the happy owners and slot-holders at the trophy presentation. 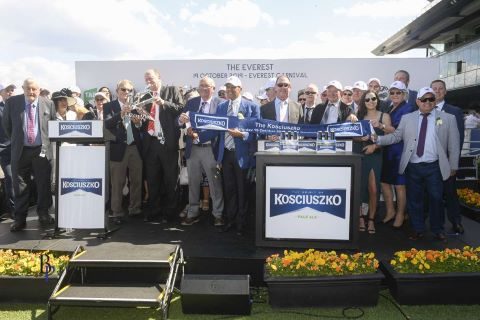 The post-race scenes, the trophy presentation and the aftermath in the winner’s room and beyond were sensational to be a part of.

The quality of Handle The Truth’s victory was evidenced by the race time of 1:08.21 which is sizzling and was quicker than Deprive’s time in the Gr 3 Sydney Stakes one race later.

Remarkably, including bonuses and trophies, Handle The Truth’s prizemoney is now officially over $1 million.

The victory in the second feature race on Everest Day resulted in widespread media coverage and an appearance by a very tired-looking Yours Truly the next morning on Thoroughbred Weekly. The morning after a big race win is not ideal for live TV!

A particular highlight from the win was that we were able to enjoy it with Keith Dryden. Last year we celebrated our 30-year association and to be able to share our biggest moment together made it extra special (pictured below, courtesy of Bradley Photographers). 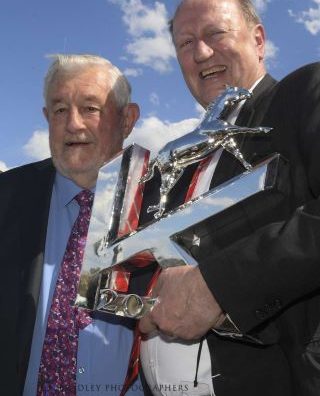 While the overall management of the horse and the lead-in to The Kosciuszko were a credit to Keith and his team, the win was part of a very long-range plan that turned out better than we could ever have imagined. When Handle The Truth’s dam, Assertively, retired from racing as a disappointing maiden, I was keen to keep her in order to send her to Star Witness as it introduced some well-balanced linebreeding to the good mare Audrey Joan. We could not keep the first product of the mating due to xray issues and sold him cheaply. However the second foal had clean xrays so we retained him and the result is Handle The Truth.

We subsequently sold the mare in-foal to Star Witness (a bad move now!) but hopefully we will get some future benefit as we bought back into the full-sister to Handle The Truth when Ben Ahrens bought her as a yearling at the Magic Millions Gold Coast March Sale earlier in the year.

Even before last Saturday the Handle The Truth journey has been fantastic and after last Saturday’s magnificent outcome, we hope that there is more to come.