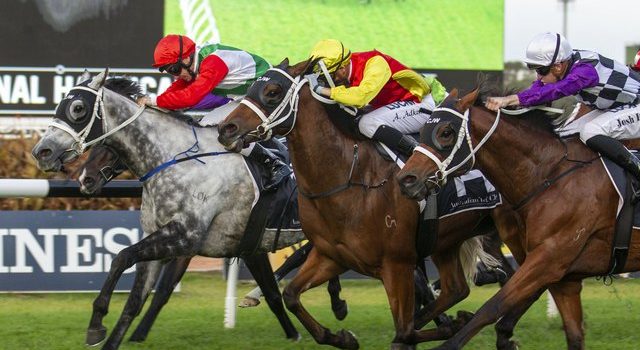 Sir Bacchus boasts a win over Redkirk Warrior but while the latter has gone on to win three Group One races, the Chris Waller-trained gelding will be aiming for a first black-type success in in the Winter Stakes.

Redkirk Warrior will run in the July Cup at Newmarket on Saturday while Sir Bacchus will be at home at Rosehill after getting into the field for the Winter Stakes (1400m) as first emergency.

One of two runners for trainer Chris Waller, Sir Bacchus has been promoted to the field with Patrick Payne deciding to run Widgee Turf at Caulfield instead.

Payne will still have Chamois Road in Saturday’s Rosehill feature while Waller also saddles up Invinzabeel.

Sir Baccus’s win over Redkirk Warrior came in October 2016 in a 1200m-race at Moonee Valley in which another subsequent triple Group One winner Santa Ana Lane was fourth.

While he hasn’t risen to those heights, Waller believes Sir Bacchus can make his presence felt with luck.

“He’s going OK but needs luck because his get-back racing style makes it hard for him,” he said.

“Invinzabeel has an awkward gate but at least he is getting back on a good track which will suit.”

Invinzabeel to be ridden by Blake Shinn, is a $6.50 chance while is at $18 with Jay Ford to ride.

The John Thompson-trained Dreamforce was the $5 favourite on Thursday just ahead of stablemate Special Missile at $5.50.

Dreamforce looked the certain winner of the Civic Stakes on June 30 before being claimed on the line by the Waller-trained Liapari to go down by a half head.

Special Missile also loomed to win his most recent start before being overwhelmed late to finish third in a 1600m-race won by Karavali from Dark Eyes.

But if third emergency Flow gets a start, King will ride the Godolphin sprinter.