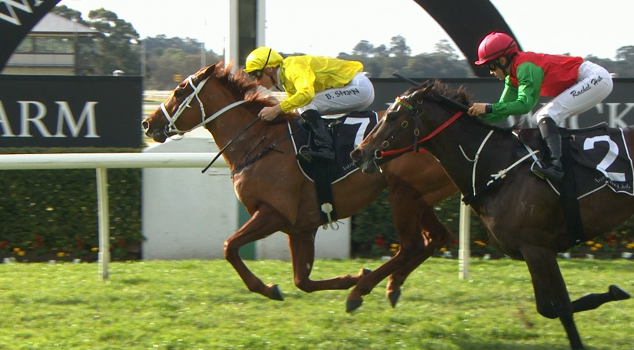 Switched to Darley Victoria this spring, Golden Slipper winner Sepoy had a smart winner at Warwick Farm on Wednesday with promising filly Sweet Scandal confirming her potential with a tenacious win.

The Chris Waller trained three-year-old filly broke the ice at her second start at Canterbury last month winning a maiden event over 1250 metres and was set a task for this assignment stepping out to 1300 metres for a Benchmark 75 event and taking on older mares.

She rose to the challenge, leading all the way for Blake Shinn to win by a long neck in an encouraging performance.

“She’s done a good job to go from a maiden to a benchmark 75 and taking on the older mares,” Waller said.”She’s taken a couple of steps today and that’s the sign of a progressive horse.

“Blake didn’t go too fast, kept a good hold on her and it suggested to the other riders that Blake Shinn’s in front and he will roll along.

“That’s a big thing for a horse. They like to know there’s something in their mouth, they’re not running flat out and when they do ask them to quicken, they can.

“I hope I’m not jibbering but that’s how it looks to me.”

With Sweet Scandal set to turn four in 22 days, Waller said ideally he’d try to find another suitable option before the July 31 end to the 2017/18 season to take advantage of the filly’s BOBS bonus scheme eligibility.