Swiftly Does It.. Again

A graduate of the 2012 Magic Millions Yearling Sale, Swiftly Red (Testa Rossa x General Resolve) recorded her second win, from her last four starts, scoring by a short head in the Andy’s Earthmovers Handicap over 1400m for trainer Tony Noonan at Bendigo.

Holding off a late challenge in the final 50m of the race, Swiftly Red held on to record her fourth consecutive top four finish.

“I’ve got to give a lot of thanks to my foreman Viv Bertrand and Lisa Jones who manages our farm,” Noonan said.

“They have done a lot of work with the mare who has had blood enzyme problems in the past and a lot of people have worked extremely hard and got a lot out of her.” 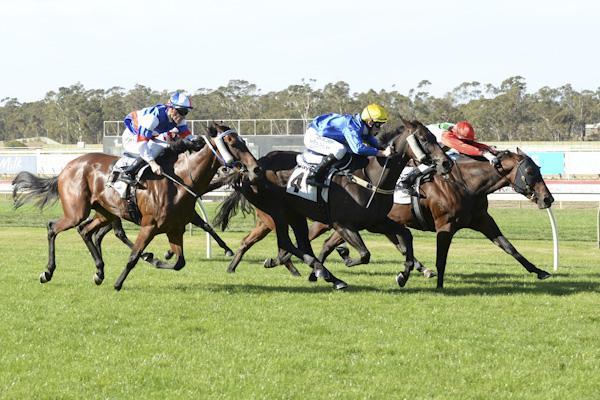 Ridden by leading jockey Nick Hall, he continued his perfect record on the mare, two rides for two wins!

Jumping from barrier 1, Swiftly Red pinged out of the gates forcing Lilian to work hard in the early stages to find the lead.

Settling Swiftly Red in the run, Hall eventually gave up the lead but gave his mare the dream run in transit on the fence, one behind Lilian.

Peeling out at the top of the straight, Hall peeled out and balanced up Swiftly Red ($4.60) who was strong to the line to score by a head from Deeming ($6.00) and Ungreatful Ellen ($2.70) in third.

“I was happy to switch her over to the left and it really got her through the line,” Hall said.