A year ago, VILAKAZI STREET was in a rich vein of form that culminated in a victory in the $60,500 Albury City Handicap, and a great second in the Wagga Town Plate.

As a consequence of his consistency and achievements, he was severely penalised by the handicappers under the benchmark system, which rendered him uncompetitive in his new grade. Despite actually racing in form, he’d had seven unplaced starts before a return to Albury for the same race, albeit for $10,500 less prizemoney than the previous year. Constant rain had made the track softer than what was ideal for the horse, and the outside draw also made it theoretically difficult. A solid tempo in the race meant that he was back in last position, but he was able to get to the outside and gradually work home under Kevin Sweeney’s persuasion to arrive in time to make it back-to-back victories in the feature race on the first day of the Albury Carnival.

It was Vilakazi Street’s eighth win from 33 career starts, and took his earnings past $200,000. In addition to the victories, he has also run second nine times, so the fact he has run in the first two in more than half his career starts, despite his string of unplaced runs, highlights what a consistent horse he has been for his connections in his career to-date. At this stage, the next-start plans for him haven’t been determined, but a return to Wagga for the Town Plate in early May looms as a possibility. 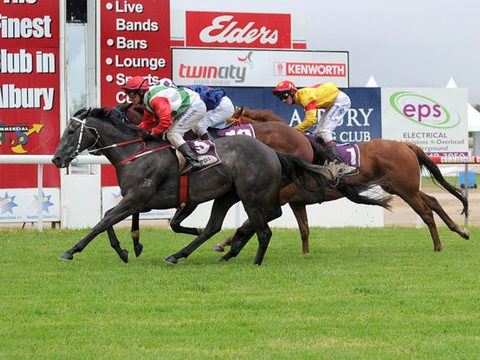