He’s the younger brother of a Group 1 winner who speaks the same language, albeit with a southern accent.

Texas Rebel, a half-brother to Rebel Dane, broke through for his first career win with victory in race three (1400m) at Randwick on Anzac day.

“He’s a big, lean horse and he’s just starting to fill up his frame.” 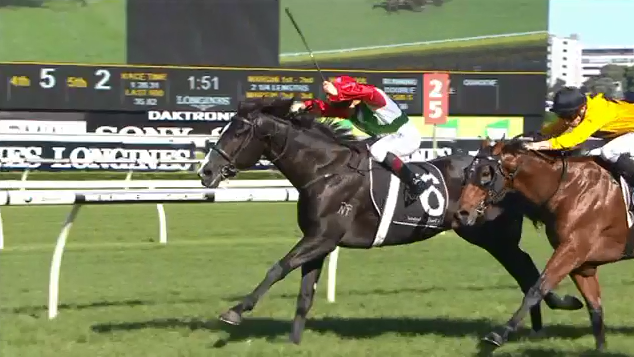 With the same trainer, the same looks and wearing the same silks as Rebel Dane, the three-year-old son of Texarcana scooted up the rail to just hold off Go Benny ($6.10), with the Gai Waterhouse-trained Red Knot ($2.30 favourite) in third.

“He obviously doesn’t have the turn of foot of his brother but he’s only won by a head today and hopefully he keeps the trend up,” Portelli said.

“He actually came in last time and I wasn’t happy with him so I tipped him out again. He came in for this preparation and he’s stronger, but he’s still not there yet. He’s a long way from being where I think he’s going to be in six months, 12 months time.

“He’s a big jumping type, he’s got a fantastic attitude and he’s a lovely horse to train, and great to see the colours back up and winning again.”

Having jumped from gate four, the colt was given a smart ride from Travis Wolfgram, who took advantage of the rail being out 12 metres.

“His last few starts he’s drawn bad and we’ve gone back on him,” Wolfgram said.

“Everyone’s been scouting a bit wider so the inside was a bit untouched and being the first go at the 1400m, I needed to cover him the best I could.”