The saying “I’ve been everywhere man”….really applies to our four-year-old Fastnet Rock mare Posh Rock, having done her earlier racing in Victoria before a few runs in New South Wales and then back to Victoria where she was successful at winning the Racing.com Maiden Plate over 1400m at Ballarat on Thursday for trainer Tony Noonan.

Finishing just over two lengths in fourth position when racing fist-up this time in, the step up in trip really helped the mare to break her maiden and start to show some promise.

Jumping away with the rest of the field, she went forward to settle in fourth position with the favourite on her inside.

Never letting the well-backed runner out of his sight, jockey Jake Noonan had the favourite pocketed and kept him there, stuck right behind the leading duo with nowhere to go.

Posh Rock surged late to take the event by a head with favourite backers left wondering what may have been.. but oh well.. Posh Rock won and that is all that matters! 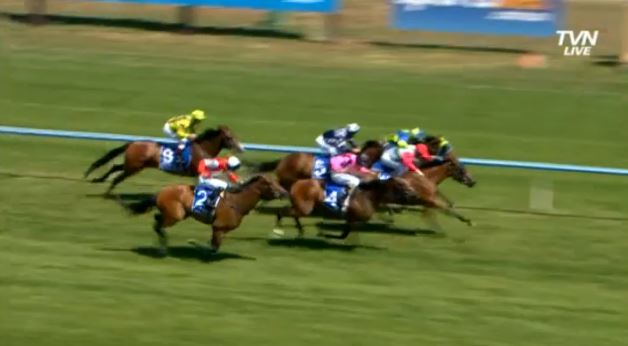 Purchased from the Magic Millions Yearling sale from the draft of Newhaven Park Stud, Posh Rock is a full-brother to the Group Three-winning, Group One placed We’re Gonna Rock from a family that includes the Group One Dubai World Cup winner Monterosso.

Not only do the connections take home the first place prize money collect, but the also had an additional $20,000 VOBIS Gold bonus added in!

A special mention to trainer Tony Noonan, with the victory of Posh Rock foillowing on from the recent wins of Grand Orator and Swiftly Red in the past month!

Swiftly Red went on to finish third two races after Posh Rock was successful at Ballarat.