Rebel Dane Arrives In Brisbane Ahead Of Doomben 10,000

Group 1 winner Rebel Dane has arrived in Brisbane ahead of the 2014 Doomben 10,000 and trainer Gary Portelli has revealed that the talented sprinter will not have another serious piece of work ahead of the Group 1 event at Doomben this Saturday.

Rebel Dane had his final serious trackwork gallop before the Doomben 10,000 in Sydney on Saturday.

Rebel Dane was given a testing gallop on Saturday morning after finishing second behind Absalon in a barrier trial over 1030 metres at Rosehill Gardens on May 12 and Portelli told Sky Racing HQ yesterday that the float trip to Brisbane was all that the California Dane entire needed before running in the Doomben 10,000 this weekend.

“He left at about half past four this morning and he is on the truck,” Portelli said yesterday.

“We are going to pull up about half way and give him a good hour rest somewhere and he will probably get there before 4.30 this afternoon.

“He had his gallop on Saturday morning, his last gallop because realistically these float trips up are as good as a gallop sometimes. 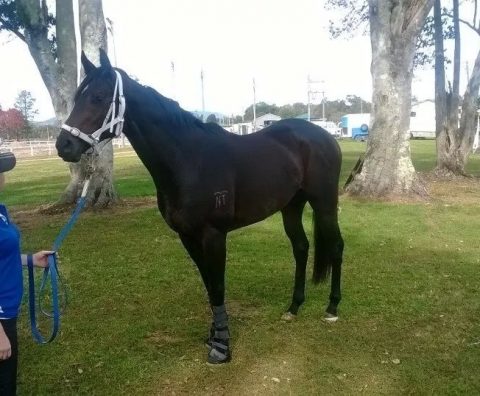 Rebel Dane prior to leaving for his trip to Queensland.

“I thought that I would give him a good gallop early in the week, he trialed last Monday as well over 1000 metres at Rosehill, so he has done plenty of work in the last month leading up to this.”

Rebel Dane returned to the races, after a lengthy stint in the spelling paddock, with a strong second behind Lankan Rupee in the Group 1 T.J. Smith Stakes (1200m) at Royal Randwick on April 12, but was unable to replicate that performance when he finished fifth in the Group 1 All Aged Stakes (1400m) at the same venue a fortnight later.

Portelli admits that he was extremely disappointed with Rebel Dane’s effort in the All Aged Stakes, but is hopeful that the four-year-old can return to his best form for the Doomben 10,000 and the Group 1 Stradbroke Handicap (1400m) at Eagle Farm two weeks later.

“The preparation was always to start off in the T.J. Smith, go to the All Aged and give him four weeks off into the Doomben 10,000 and a fortnight into the Stradbroke,” Portelli said.

“It was a bit disappointing what happened second-up.

“We were very keen on him and there was no reason or sign of anything that was wrong with him heading into the race and he just raced two lengths below what was expected by him from all of us.

“It leaves you a bit sort of shell-shocked, because you read the signs and all the signs were good, but obviously that run took a bit out of him and at this level you don’t want to lose anything because you can be found wanting very quickly.

“It was a disappointing day, but you have to pick yourself up and move forward and we have done everything that we can do to make sure that everything is right again and we hope that first-up run hasn’t taken too much out of him again.”