Quality filly She’s Positive provided her sire and owner with their first winner when she scored a dashing win in the $200,000 Magic Millions Adelaide 2YO Classic at Morphettville today.

The exciting youngster, who is trained by Tony Noonan in Victoria, showed dash from the barriers and led throughout to beat local Bullion Wolf by a length and three quarters.

Mr Markou was third home, a half neck from the runner-up, while the warm favourite Dam Ready, a last start winner at Moonee Valley, was another short neck back in a dead heat with Hussy’s Glow in fourth place.

She’s Positive joined the Noonan stable after being purchased by her owner Frank Carnovale for $180,000 at last year’s Magic Millions Gold Coast Yearling Sale from the draft of Yarraman Park Stud.

Winning rider Jake Noonan was all smiles after piloting home the filly in an important win for the connections including his father Tony.

“She’s definitely got a bit of an attitude,” a delighted Jake Noonan said.

“She can be quite full-on and has white line fever when she steps on to the track.”

“They’ve done a magnificent job to get her to this stage and make her controllable.” 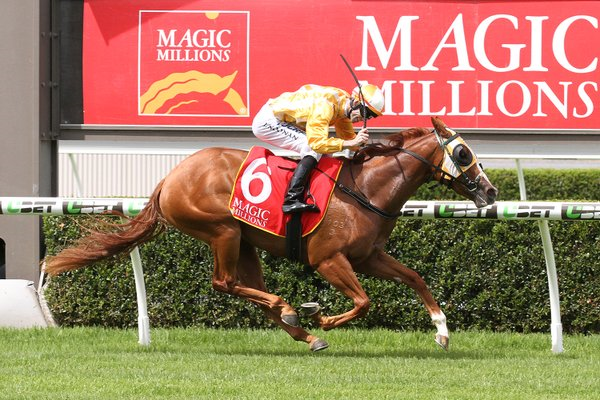 Jake’s father Tony was delighted to learn as part of the victory he won a $10,000 sales credit voucher to spend at this week’s Adelaide Yearling Sale.

“That’s just fantastic – another bid,” he said with a laugh. “Jake is one of my three kids and they say he is the golden child. Well right now he certainly is.”

“We didn’t plan to ride the filly like that but full credit to Jake for a clever ride and we got the chocolates. It’s a great result.”

She’s Positive, who earned black type at her previous run when second in the listed Cinderella Stakes, is the initial winner for her sire, the Group One winning Elusive Quality stallion Sepoy.

She is from the Group Three winner Be Positive and is a half sister to the stakes placed Mr Optimistic.

She’s Positive was bred by Laurel Oak Bloodstock and Glenn Fraser, who raced her dam together, and was foaled and raised at Yarraman Park.

She is the second of only two foals for Group 3 winning Anabaa (USA) mare Be Positive, who died after foaling She’s Positive in 2013.