While most at the Warwick Farm barrier trials on Friday were expecting Rebel Dane to set tongues wagging, it was in fact his stablemate Tuscan Falls that produced the goods.

The veteran of only one prior trial – back in October where he finished third, two-year-old Nicconi gelding Tuscan Falls impressed all at Warwick F arm with a very impressive performance in his trial.

Jumping from the middle of the line in Heat 11 over the 800m, jockey Brenton Avdulla hunted him forward to take the lead. Sporting a pair of blinkers, the gelding maintained his lead of about a length until the home turn.

As they came wide when teh field rounded the home turn, Avdulla asked his mount for more, and he really extended to take the heat by an impressive three length margin from the Clarry Conners-trained He’s A Given.

Secured at the 2013 Inglis Easter Yearling Sale as Lot 473 from the draft of Turangga Farm, Tuscan Falls (pictured below as a yearling) is the first living foal out of the winning General Nediym mare Queen Of The Falls, herself a half-sister to the Group Two -winning, Group One placed Elite Falls, both daughters of the Group Three-winning Danehill mare Niagara Falls. 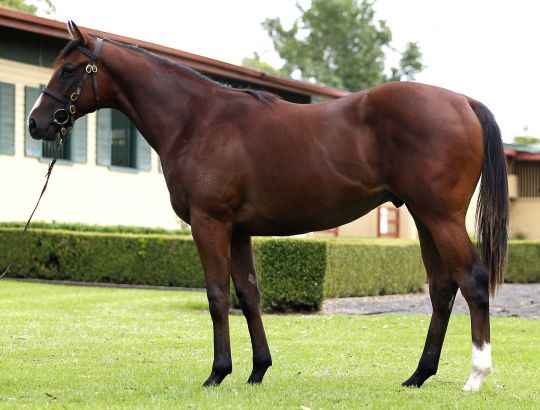 Trainer Gary Portelli was suitably impressed by the rising three-year-old and will wait to see how he pulls up before he decides on which direction to take.

Earlier in the day, Laurel Oak Bloodstock’s Group One winner Rebel Dane was in action, contesting Heat 7 over 800m.

Ridden by Hugh Bowman, Rebel Dane settled out wide in a mid-field position during the run. Pulled even wider on the turn, he worked home well to take third, beaten a head x half head by Celtic Prince and Dear Demi with the beaten brigade including Laser Hawk, Bull Point, Tougher Than Ever and My Kingdom of Fife.

After the trial Portelli was pleased with the effort but stated on Twitter that “he pulled up really big and that he had only had one decent gallop since Stradbroke Handicap.”

With Portelli also indicating that since Rebel Dane is older, he requires more work to get fit.

In what was a great day at the trials for the Laurel Oak Bloodstock horses, we really look forward to the coming weeks and months of the Spring Carnival when we see these two, plus a host of other runners head to the track!