Welcome to the October edition of Grandstand View, the second in our new format.

As part of our new newsletter system, we have sent out two interim reports to-date, celebrating the win of CONFIDENTIAL in Canberra and sharing our excitement in having EXCELTIC as our first-ever runner in the Breeder’s Plate, the first 2yo race of the season. Unfortunately the latter did not eventuate. We sent the pre-race report on Wednesday; by Thursday there was an element of doubt as to whether Exceltic would be right to run; and by Saturday morning he was scratched from the race as it was clear that he had had enough for the time being and a spell would do him more good than a race start.

To their credit, the Australian Turf Club still provided Member’s passes for all attending owners, as a lot of owners had planned to be at the big Epsom Day race meeting, but suddenly did not have a horse racing.

Off the track it was a very big month for Jill and me as our only son, Alex, whom many of you know as part of the Laurel Oak team, married his sweetheart, the lovely Rachel, on 7 October. With overseas relatives staying with us for almost two weeks before and after the wedding, a lot of our focus in that time was on the wedding itself (which went off superbly), and pre- and post-wedding celebrations and activities. 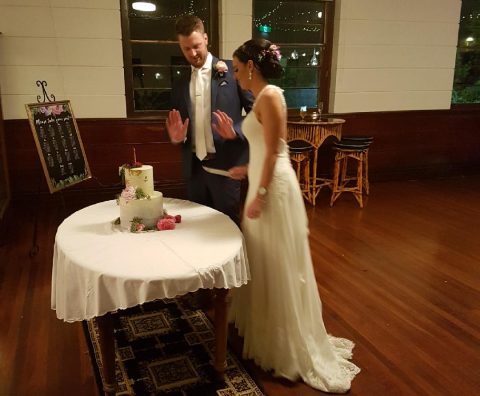 The newlyweds Alex and Rachel look so happy together. Early reports from Rachel say that Alex does what he is told and from the evidence of this photo I can understand why (photo courtesy of Ian Mathieson)

It is obviously a very exciting time of year, with the Sydney Spring Carnival culminating in The Everest now concluded, and the Melbourne Spring Carnival building up to its highlight, being Melbourne Cup Week. Unfortunately it doesn’t look like we will have a Laurel Oak runner competing in the big events this year. Social media reminded us that Caulfield Cup Day was the 12-month anniversary of Laurel Oak’s best-ever day at the races, when REBEL DANE won the Gp 1 Manikato Stakes and SIR BACCHUS won the following race at the Moonee Valley meeting to make it a sensational double for our owners. Runner-up to Sir Bacchus that night was Redkirk Warrior, who subsequently went on to win the Newmarket Handicap, and then earlier this month ran in The Everest.

Rebel Dane is of course now retired and at stud, whilst Sir Bacchus is having an extended spell recovering from a cracked pelvis. While our racing team appears to be oozing with talent, so far none of them has emerged to prove to be as good as Rebel Dane or even Sir Bacchus at this point in time, while timing has not worked out right for our proven Saturday-class horses and potential Carnival horses to be running in big races this spring.

Fortunately, away from big Carnival races, the team is racing well. While we haven’t had a lot of runners in the past few weeks, compared to some months of the year, there is a wave of horses in work and getting near the trial or race stage, so there will be increasing action to report in the coming weeks and months.

From our recent runners though SIKHING GLORY and FLASH IN THE DARK both made it back-to-back wins.